A new 10” line was being installed and commissioned with a need for a four pig train to be detected during launch and receipt, the first pig was being launched a number of months prior to the last three pigs.

The first pig was to be equipped with a normal 801 acoustic pinger which only activated when the launcher was flooded by the sea-water. This water activation ensures that battery life is conserved until the unit is actually required to transmit acoustic data.

This method of water activation would not be suitable for subsequent pigs as they would all become active at time of flooding so an alternative option was requested. The final solution was to modify a standard 3014X EM transmitter by adding four features:- 1 Pressure switch activation of electronics 2 Magnetic activation of transmission of electromagnetic signal 3 Dual rate capability to provide a pass/ fail signal relating to the gauge-plate condition
4 Increased pressure rating for hydrotest operation.

During flooding operations the transmitter was exposed to 9bar pressure, this was sufficient to activate the electronics within the unit and place it into a standby mode.

When the second pig was launched six months after first pig launch then this removed the magnetic influence (seen nearer centre of this pig) of the third pig from the transmitter and the unit started transmitting the EM signal. Note that this EM signal from the second pig continued even after the third pig arrived into the receiver.

The final pig was fitted with a similar modified 3014 unit as fitted to the second pig with the additional ability to monitor a modified aluminium gauge plate.

If the gauging pig passed through the line without any damage then the unit would send an EM pulse once every four seconds but if damaged then this pulse would repeat every two seconds, an easily detectable change for the ROV detectors to check. In the above image the cable leading from the transmitter through the pig to the gauge plate is clearly visible.
All pigs were designed and built by IK-UK to ensure complete turn-key provision from Online to the end client.
The operation was successfully concluded with first pigs detected using acoustic and magnetic technology and then latter pigs detected using magnetic and electromagnetic methods. 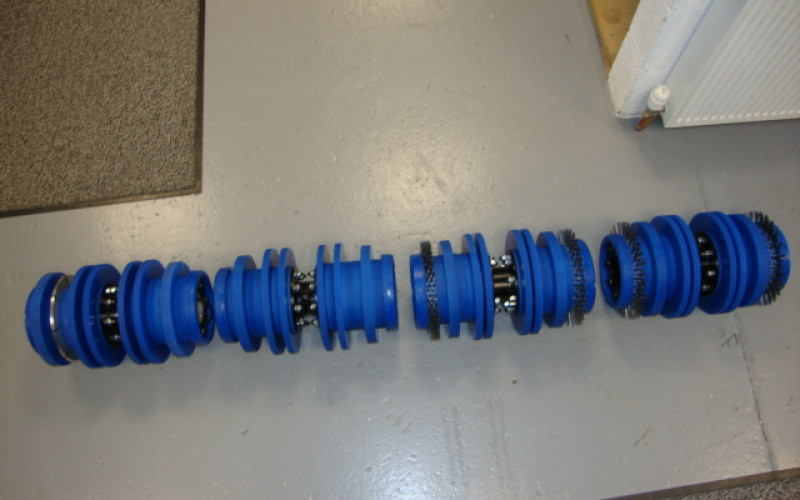