In late 2017, Online Electronics in collaboration with their sister company IK UK, provided pipeline pigs along with pig tracking and signalling equipment for the line fill operation on a 68km, 12” export pipeline at a major gas field in central Oman.

The project was approaching first gas and a quantity of associated condensate was anticipated to be produced.  The pipeline was filled with nitrogen at 2barg and considered commissioned having been through the usual construction, pre-commissioning & commissioning phases.

The duration of the line fill operation was dependent on production of condensate associated with the gas and was therefore difficult to determine precisely.

The operation involved “leap frogging” the line in order to track the pig’s progress and confirming launch and receipt of the pigs.  A number of factors had to be considered when designing the pigs such as how to mitigate bypass, the capacity to mount a suitable electromagnetic transmitter and the inclusion of magnets to activate the Online 4001D non-intrusive signallers to be fitted at the launcher and receiver

The bi-directional mandrel pigs included six sealing discs rather the typical four. This increased the sealing efficiency by increasing the number of barriers within the tool and increased the differential pressure required to move the tool through the pipeline.  This prevented “run away” in downhill sections – particularly if the pig were to be stopped due to availability of condensate.

The pig body material was manufactured from stainless steel in order to maximise the signal from the electromagnetic transmitter as carbon steel inhibits the EM signal. Due to the criticality of the operation and the “leap frogging” tracking operation, the most powerful transmitter suitable for the size of pig body was selected, the Online 3015X.  This ATEX transmitter is rated to 500 bar and with the inclusion of lithium cells can function in high operating temperatures such as those seen in this particular application.

Online also supplied technician support at site with the two technicians tasked with verifying the operation of the non-intrusive signallers and agreeing with the client the best positions from which to track the pigs.  As the pigs passed an agreed location, Online’s second team were in position downstream, ready to identify the pigs as they passed location two.  Team one in that period would “leap frog” to the next agreed location.  This continued until the line fill was achieved and the magnetic signallers confirmed the pigs had been received. 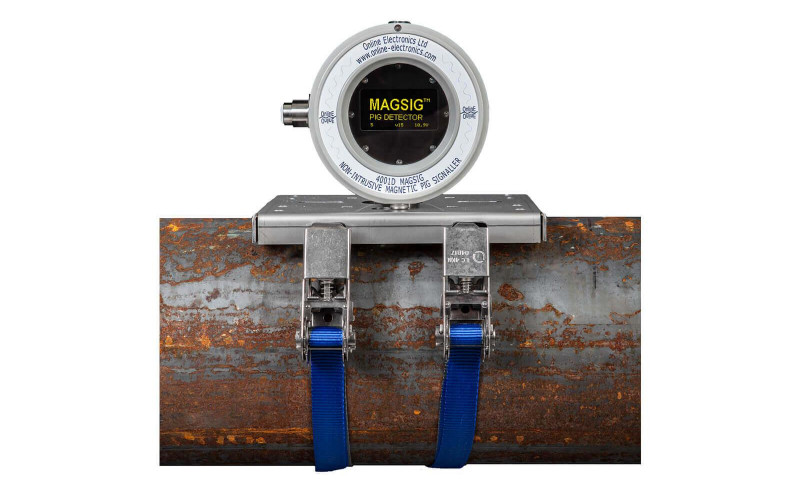